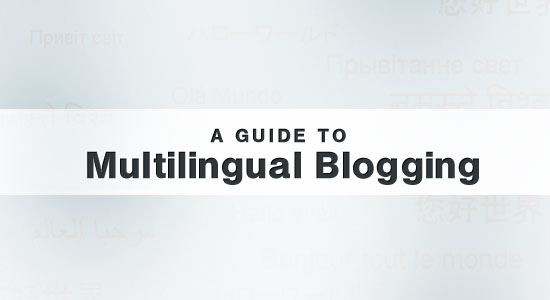 You might be an aspiring blogging superstar or well on course for your 500,000th unique monthly visitor, but the one thing all bloggers have in common is that they are writing for a global audience.

Even if you do only share your unique knowledge and insight with the world in English, the fact is that anyone from Miami to Mozambique can end up perusing your carefully crafted pages…and this is why there is a strong argument for adopting a multilingual blogging strategy.

Of course, if you are just a casual blogger with no intention of making money from your hobby, then you’ll probably get by just fine in English. But if revenue is the name of the game, then it might just be worth your while going down the multilingual route. 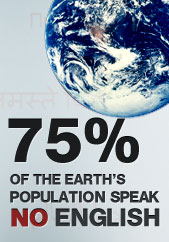 75% of the Earth’s population speak no English which is a lot of people for monolingual bloggers to be missing out on. English is the most widely spoken second language, which is why you’ll often see a European blog with a side-by-side translation of the content – the original post in German, French, Italian…whatever the native language is, and one in English. With that in mind, would a similar setup benefit your English-language blog?

Multilingual blogging may sound like a rather daunting prospect at first. If you – like most native English speakers – don’t speak any other languages, then that’s your first problem. If you happen to speak one or two other languages, you probably don’t want to spend all your time translating your posts.

The rise of the machines…

Everyone’s probably copy/pasted a paragraph or two into Google translate at some point, either out of curiosity or because they genuinely want to know what something says on a foreign website. The truth is, Google translate isn’t actually all that bad if you’re not too fussy about grammatical correctness and the nuance of meaning. In other words, Google can get the general gist of a foreign language message fine.

But before you consider using this to translate your precious blog posts, you need to enhance your changes of hitting a good machine translation. And this all begins with how you write your English post in the first place.

Google translate is good, but it can’t decipher slang, colloquialisms or words that have multiple meanings. So rather than ‘going bonkers’, perhaps it’s best ‘going mad’…and you’re best using ‘food’ over ‘chow’ or ‘grub’.

A controlled English language model may restrict your creativity, but it will help to ensure that any subsequent machine translation is accurate.

Through using a controlled language approach, each word can only have one meaning. Once you learn what words Google translate likes and what it doesn’t, you can build a glossary of the best terms to use.

Blogging platforms such as WordPress also have translation plugins available, so that when the plugin is installed, it generates a series of national flag icons which the user can click to automatically translate the content into their desired language.

Humans to the rescue…

If you’re not entirely comfortable with a user-generated translation approach and would rather have the content machine-translated yourself, you can pay for the services of a native-speaking translator who will essentially proofread and edit the text. Given that the machine translation will be reasonably accurate, all the human has to do is check for errors and help avoid any potentially embarrassing lexical slipups. This means you can maintain the creative dexterity of your English blog content.